On Easter Tuesday, a crowd had gathered to watch Distillery beat Linfield 3-1 at Windsor Park in South Belfast. Those sports fans were unaware that their city was about to endure what became known as The Easter Raid of the Belfast Blitz. Overhead in the cool April air, a Junkers JU-88 plane circled the city centre.

That evening, between 150-160 bombers left bases in northern France and the Netherlands. The Luftwaffe was bound for Belfast. Heinkel HE-111, Junkers JU-88, and Dornier planes made up the attacking force. Elite pathfinder squadron Kampfgruppe 100 lead the first wave, dropping flares to guide following bombers.

Timeline of the Raid

15th April 1941 – 2245hrs
The first air-raid sirens wailed at 2245hrs on 15th April 1941. By this time, RAF 245 Squadron at RAF Aldergrove, Co. Antrim was stood down amidst fears of friendly fire. Of Belfast’s 22 anti-aircraft guns, the military man only 7 of the sites. Hundreds of flares illuminate the sky as the Luftwaffe approach the city.

I was walking up the Glen Road when I heard the sound of aircraft coming from the Lisburn direction. The next thing the air raid sirens went off and I knew from the peculiar phut, phut, phut sound that these were Germans and this was it.

A primary target of this raid was the Belfast Waterworks. They had already suffered damage during a bombing raid the previous week. For many years, Belfast assumed the Germans mistook the waterworks for the docks. The waterworks was an intentional Luftwaffe target. As the city burned, the damaged waterworks could not produce the required pressure to battle the flames.

With the Luftwaffe focussing on the Belfast Waterworks, many areas in North Belfast suffered greatly. Damage to New Lodge, Shankill, and Antrim Road was severe and saw many lives lost.

Across the city, a popular folk singer Delia Murphy played to a sold-out Ulster Hall. She continued her performance as the bombs fell, perhaps saving lives as the sturdily built venue was safer than many of the air raid shelters. Many people of Belfast died when bombs impacted near shelters such as in Percy Street.

As the incendiaries, bombs, and mines fell, panic spread throughout the city. In some cases, people fled towards air-raid shelters. They were few and many of them poorly constructed. Some, like on Hallidays Road, were not capable of withstanding a direct hit. There were no survivors from this particular shelter. Others took shelter in their own homes. They hid under tables or beneath the stairs. Survivors were pulled from the rubble on occasion, lucky their homes escaped a direct hit or were not ravaged by fire.

In the New Lodge area of North Belfast, residents made a dash for the mills. The sturdy looking buildings appeared to give great shelter against the Nazi bombs. This was not always the case, though. Thirty-five were killed under a collapsing wall at the York Street Mill. The falling wall demolished other buildings on Sussex Street and Vere Street. In Clonard Monastery on the Falls Road, three-hundred souls took shelter, including many of Protestant backgrounds. They huddled in the underground crypt, singing hymns and reciting prayers as the bombs fell.

16th April 1941 – 0145hrs
At 0145hrs, a bomb fell on Belfast’s Central Telephone Exchange. All communication lines were now out of action across Belfast. A railway telegraph link still operated between Belfast and Dublin. With the Telephone Exchange out or action, there was no contact with anti-aircraft operations control rooms. Guns on the ground fell silent as there was a fear they may shoot down RAF Hurricanes scrambled to fend off the Luftwaffe planes.

Little did the people of Belfast know that Fighter Command had withdrawn the Hurricane Squadron before the raid. For the following 2 hours, the Luftwaffe attacked Northern Ireland’s capital city unopposed. A brief barrage from HMS Furious in Belfast Port lasted only until the recoil of gunfire meant the ship sheared loose.

16th April 1941 – 0400hrs
At 0400hrs, with the city in flames, MacDermott, Minister of Public Security contacted Agriculture Minister Basil Brooke. His request was for permission to seek help from de Valera’s Irish Government. Permission was granted and at 0435hrs a telegram was sent to the Irish Taoiseach. De Valera agreed to help without hesitation. Irish Firefighters from Dublin, Dun Laoghaire, Drogheda, and Dundalk made their way north of the border.

Around 140 fires raged in Belfast and the horror overwhelmed even the most senior in the fire service. With water mains cracked and severe damage caused to the Waterworks, local firefighters were up against it. Belfast’s Chief Fire Officer, John Smith, was said to be hiding and weeping beneath his desk at Chichester Street Fire Station.

I don’t think any of us noticed the dawn for in a sense it had never been night.

16th April 1941 – 1400hrs
Traffic remained backed up trying to gain access to the Mater Hospital. Across Belfast, this scene repeated at all medical facilities. Ambulances queued in the streets, only admitting casualties hours after their injuries. The role of ‘Head of Casualty Service’ took on on new importance in the aftermath of The Easter Raid. An Australian senior physician, Professor Theodore Thompson Flynn, assumed the role. He was the father of the famous actor Errol Flynn.

In the stink of human excrement, in the acrid smell of disinfectant these dead were heaped, body on body, flung arms, twisted feet, open mouth, staring eyes, old men on top of young women, a child lying on a policeman’s back, a soldier’s hand resting on a woman’s thigh, a carter still wearing his coal-slacks, on top of a pile of arms and legs, his own arm outstretched, finger pointing, as though he warned of some unseen horror. Forbidding and clumsy, the dead cluttered the morgue room from floor to ceiling.

The city mortuaries were completely overwhelmed. They only had emergency plans to deal with a total of 200 bodies. Public baths on the Falls Road and at Peter’s Hill became temporary morgues. Reports from the time talk of over 150 bodies lying in the baths for up to three days. After this time, they were laid to rest in mass graves. More than 120 people remained unidentified.

Reactions to the Raid

In the twenty-four hours after the Easter raid, 220,000 people fled the city. Most headed to the countryside, many of them arriving in Fermanagh with only the clothes they had on their backs.

For many, the destination was irrelevant and every means of transport available was made use of. Trains and buses filled to capacity streamed from the smoking ruins of Belfast. Military lorries came into use in the transport of women and children to safety.

Those with no way to get away fled to the hills. In a practice known as “sheughing”, they slept in ditches, the open fields or cowered in barns and sheds. Officially 10,000 people crossed the border to the south. 500 of them received medical care from the Irish Red Cross in Dublin.

Thousands of Belfast’s residents departed for the nearby towns of Newtownards, Bangor, Larne, Carrickfergus, Lisburn, and Antrim. They sought refuge with friends or family. Others relied on the kindness of strangers. The small town of Dromara saw its population swell from 500 to over 2,500.

The Irish Reaction to the Easter Raid

The press in the Republic of Ireland reported of an Ireland brought together by a “national blow”. They spoke of the island’s shared traditions and common home.

By 0600hrs, the Irish government had dispatched 13 fire engines from Dundalk, Drogheda, Dun Laoghaire and Dublin. Around 70 firemen onboard were to assist their struggling colleagues in Belfast. The Irish firemen remained for three days tackling the blazes and devastation across the city. Taoiseach Éamon de Valera formally protested to Berlin.

The fire crews from the South took up their hoses and ladders and headed for home around 1800hrs on 19th April 1941. They were overworked, exhausted and famished. Two crews received refreshments in Banbridge and others were taken care of by the Ancient Order of Hibernians in Newry.

Fireman Tom Coleman, attended a reception at Hillsborough Castle on the fiftieth anniversary of the end of the war. There he met HRH Prince Charles and received official recognition for the solidarity of all the emergency responders from the Republic.

Reminders of the Belfast Blitz

The mass graves at Milltown Cemetery and Belfast’s City Cemetery are the most notable reminders of the Blitz. Large areas of wasteland where houses and buildings once stood still remain scattered around the city. In some cases, entire streets and neighbourhoods were wiped from the map. Many buildings in the city centre and Cathedral Quarter still bear the battle scars from those nights in April and May 1941.

Bombs in Belfast and beyond

Homes and businesses across the city of Belfast suffered greatly during the Belfast Blitz. These are some of the hardest hit areas.

In April and May 1941, Luftwaffe bombs on Belfast City Centre tore the heart out of the industrial city in what would become known as the Belfast Blitz. 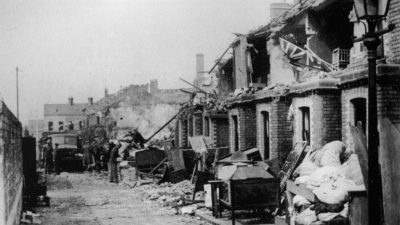 Luftwaffe bombs on East Belfast fell on the industrial heart of the city and surrounding residential areas during the Belfast Blitz of April and May 1941.

In the Belfast Blitz raids of 1941, Luftwaffe bombs on North Belfast caused widespread devastation and loss of life among both Protestants and Catholics.

During the Belfast Blitz of April 1941, Luftwaffe bombs fell on Bangor, Co. Down killing unsuspecting local residents of the seaside town in their homes.

On 15th-16th April 1941, the Luftwaffe dropped bombs on Newtownards Airfield, Co. Down killing 13 young soldiers of the Royal Inniskilling Fusiliers.

In total over 900 people died in Belfast that night. A further 1,500 were seriously injured. Around 56,000 homes sustained damage with 100,000 people left homeless. Stray bombers attacked other towns in Northern Ireland including the City of Derry and Bangor, Co. Down. No other city in Ireland, north or south, suffered as badly as Belfast. Tuesday 16th April 1941 saw the greatest loss of life during the Blitz in a single night outside London. The memory of The Easter Raid of April 1941 lives on.